Twitter is reportedly experimenting with a new feature which will show nearby tweets on a map. This feature, currently referred to as "Nearby," appears designed to encourage users to geo-tag their tweets by providing the user value in sharing their location information.

Currently, users may geo-tag a tweet, but this feature is not enabled by default. Twitter is attempted to make money by selling advertising, and having more location info about more users will make Twitter's advertising inventory more value.

Users get the benefit of being able to see what is going on around them. This may be immensely useful for finding out about current news and further cements Twitter's position as the go-to source for news happening right now.

Imagine seeing a plume of smoke rising from ten blocks away - the first thing most of us tweeters would do is search Twitter for likely keywords, i.e. "smoke SF Financial district." Even the most artfully crafted searches still leave the user sorting through a huge amount of content. Twitter's new "nearby" feature will allow users to see tweets based on their geo-tagged location, making it much easier to see tweets being sent from the area of interest. 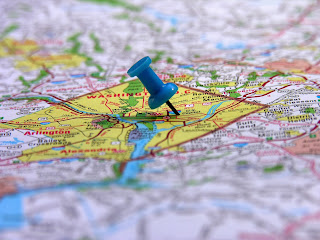 Note that geo-location enabled tweets have been possible for some time now. Several years ago, I worked with a developer who was making a "heat map" of tweets containing a given keyword. Higher tweet densities were represented with brighter colors on the map. I do not know the technical solution this developer had implemented, but so far as I can tell, Twitter's new API does not add new functionality, but rather, makes existing functionality available to users posting from 3rd party clients.

I am excitedly waiting to see the community's response to this new feature. New features often lead to new and previously un-imagined features, but the privacy challenges are daunting....


Good luck, Twitter!
Posted by Thomas Vieira at 13:17 No comments:

We received our first winter storm recently here in the San Francisco Bay. A cold low pressure system moved in from Alaska and brought with it freezing temps, driving winds, and several inches of rain. I found this inclement weather to be a welcomed break from the typical winter pattern cool, calm, hazy days. The worse of the rain moved past after a few days but left behind strong winds. I couldn't help but take advantage of this break from typical winter calm to go for a sail.

After grabbing some sandwiches and bundling up against the cold, I headed out of Loch Lomond Marina in San Rafael and set a source south to Angel Island. Taking advantage of the unusual wind out of the north west, we had a leisurely cruise under the Richmond San Rafael Bridge and down towards the bustle of one of the world's most iconic waterways.


Loch Lomond Marina is difficult for sailboats. The marina sits about one mile from the deep water channel on the edge of a tidal mud flat. The water depth leading up to the marina is about two feet, which is tricky because the sailboat I use requires five feet of depth to pass safety. Fortunately, there is a channel dredged across the mud flat which is deep enough to navigate in a sailboat. Unfortunately, this channel is poorly marked and very narrow, and the only sure way to know you're not in the channel is once your vessel becomes mired in mud.

As you can see in the above picture, there is a small channel out of the marina which feeds into a slightly larger channel at a ninety degree angle (the blue line is the path taken by my vessel through these channels). Both channels are marked poorly, and the areas immediately surrounding this turn are especially shallow. Too wide of a turn will run one aground, as will too narrow of a turn. I have "played in the mud" here on several occasions, and have learned to not even attempt entry at low tide.

Successful transit of the San Rafael Bridge under sail power was possible because of the storm's unusual winds out of the north and west. The prevailing wind, out of the south and west, is readily blocked by the bridge, making it difficult to safely cross without starting the motor. The wind out of the north, however, was able to keep the sails full all the way under the bridge - a rare treat!


Rounding Angel Island brought us head to head with a line of oncoming container ships. Luckily I was able to hug the coast and stay out of their way (and their wakes).


After rounding the southern tip of Angel Island and taking in some great views of San Francisco, we headed back upwind. Sailing against the wind is much rougher and more difficult than sailing with the wind. A sailboat cannot move directly into the wind, so we had to tact back and forth across the wind many times to get back upwind to where we started.

We averaged 4.4 mph, which is not bad for the entry-level 27 foot sailboat we were sailing. During some of the heavier gusts, we hit close to 8 mph!

Posted by Thomas Vieira at 09:20 No comments: