Genetically Modified Crops are more widespread than ever and here to stay, according to a recent report from the International Service for the Acquision of Agri-Biotech Applications, a bioengineering trade group. 1 billion hectares of Genetically modified organisms were planted in 2010, marking a stunning adopting of GM crops since their introduction in 1995.
Clive James, ISAAA's director and founder, told the BBC that more than 15 million farmers grow GM crops, and that, "during 2010, the accumulated commercial biotech plantation exceeded one billion hectares [2.47 billion acres]— that's an area larger than the U.S. or China," and equivalent to 10 percent of the world's arable land.


Its troubling to see that developing nations are planting GMOs at more rapid rate than developed nations. Multinational Corporations such as Monsanto profit tremendously off the adoption of patented GMOs, which are typically designed not to produce seeds which the farmer can reuse. This forces farmers in poor nations into a desperate cycle of mortgaging the farm to buy seeds from Monsanto. Often, Farmers who choose not to switch to GMO seed are forced to when their fields become pollinated from adjacent fields of GMOs. Once GMOs are in natural they cannot be contained, so hopefully they will not cause unforeseen consequences of a tragic nature. Regardless, its an excellent way for corperate hands to reach into the pockets of subsistence farmers around the globe by taking away what nature intended to be free: seed. 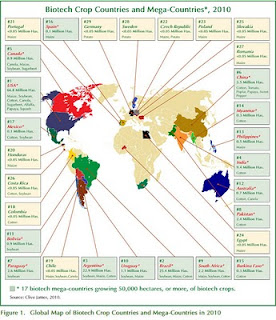 While we don't know if GMO crops are safe, it does appear that they are here to stay. Three helpless cheers for progress!
Posted by Thomas Vieira at 19:18